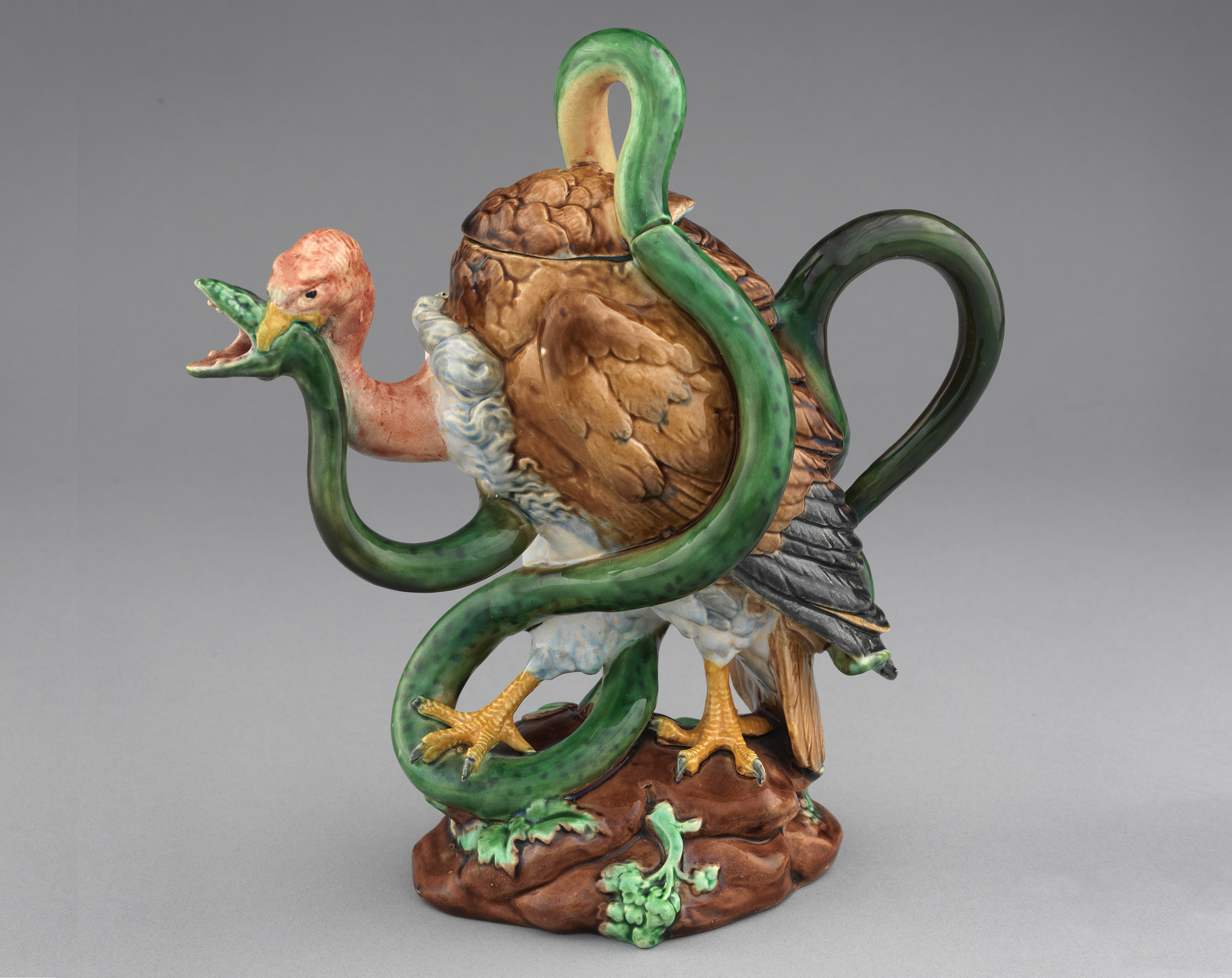 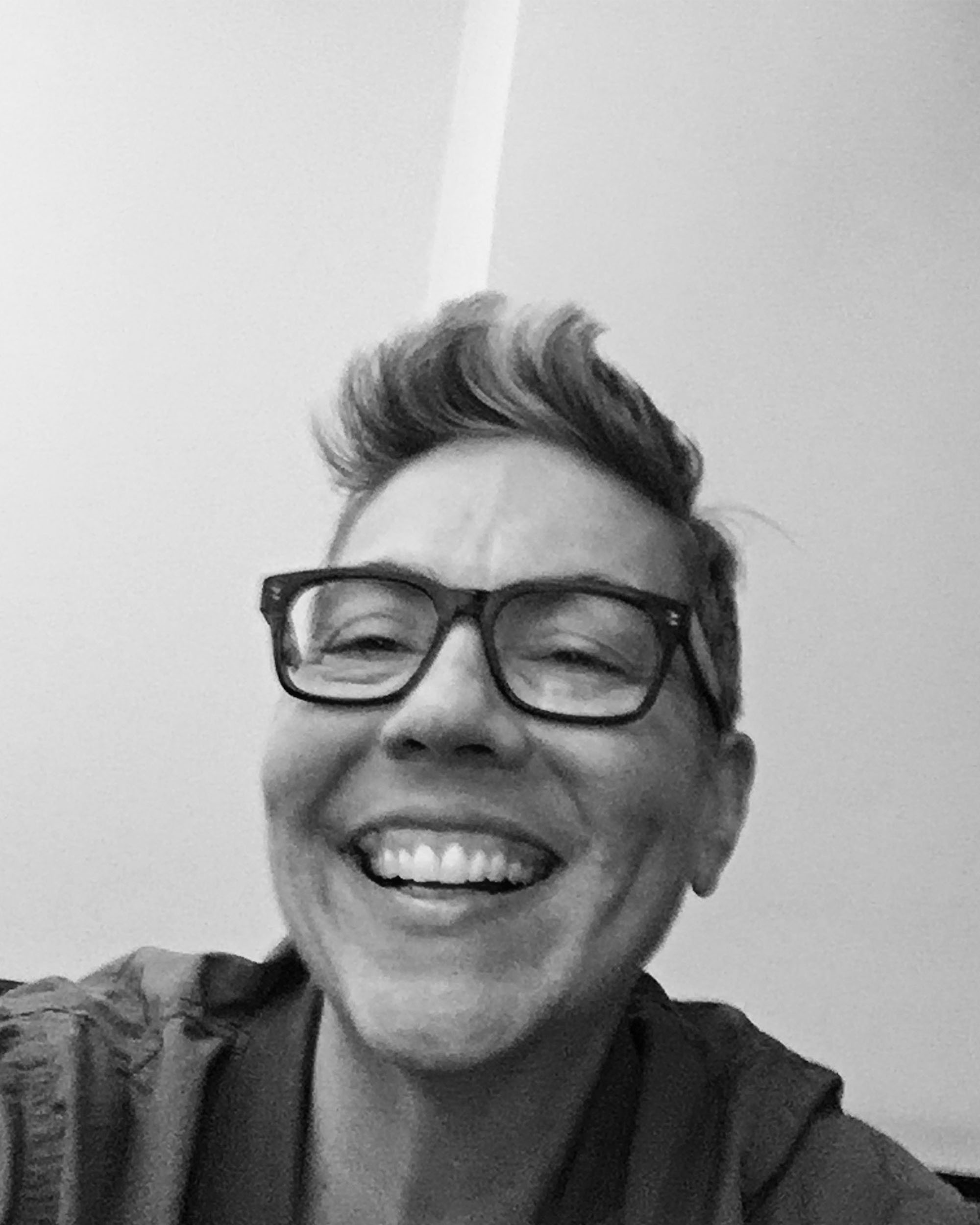 Stacy Szymaszek is the author of the books Emptied of All Ships (2005), Hyperglossia (2009), hart island (2015), Journal of Ugly Sites and Other Journals (2016), which won the Ottoline Prize from Fence Books and was nominated for a Lambda Literary Award in 2017, and A Year From Today (2018). Her sixth book, Famous Hermits, will be published this year by Archway Editions. Szymaszek was the director of the Poetry Project from 2007 until 2018. She was the Hugo Visiting Writer at the University of Montana-Missoula in 2018–19, poet-in-residence at Brown University, and visiting poet for the Fire Island Artist Residency. She has been a mentor for the Queer Art Mentorship and the Poetry Project, visiting faculty for Naropa University’s Summer Writing Program, and workshop teacher for Woodland Pattern, the Poetry Project, and Wendy’s Subway. With her partner, the poet Kimberly Alidio, she lives in New York’s Upper Hudson Valley on the sacred homelands of the Munsee and Muhheaconneok people, who, due to forced removal, reside in Northeast Wisconsin as the Stockbridge-Munsee Community.

the frogs who held the sky
— after Jar for William S. Kimball & Co.’s “Vanity Fair” tobacco 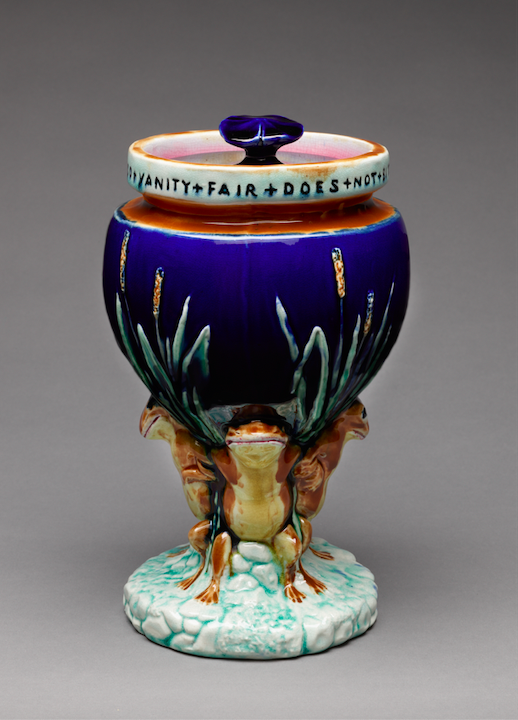 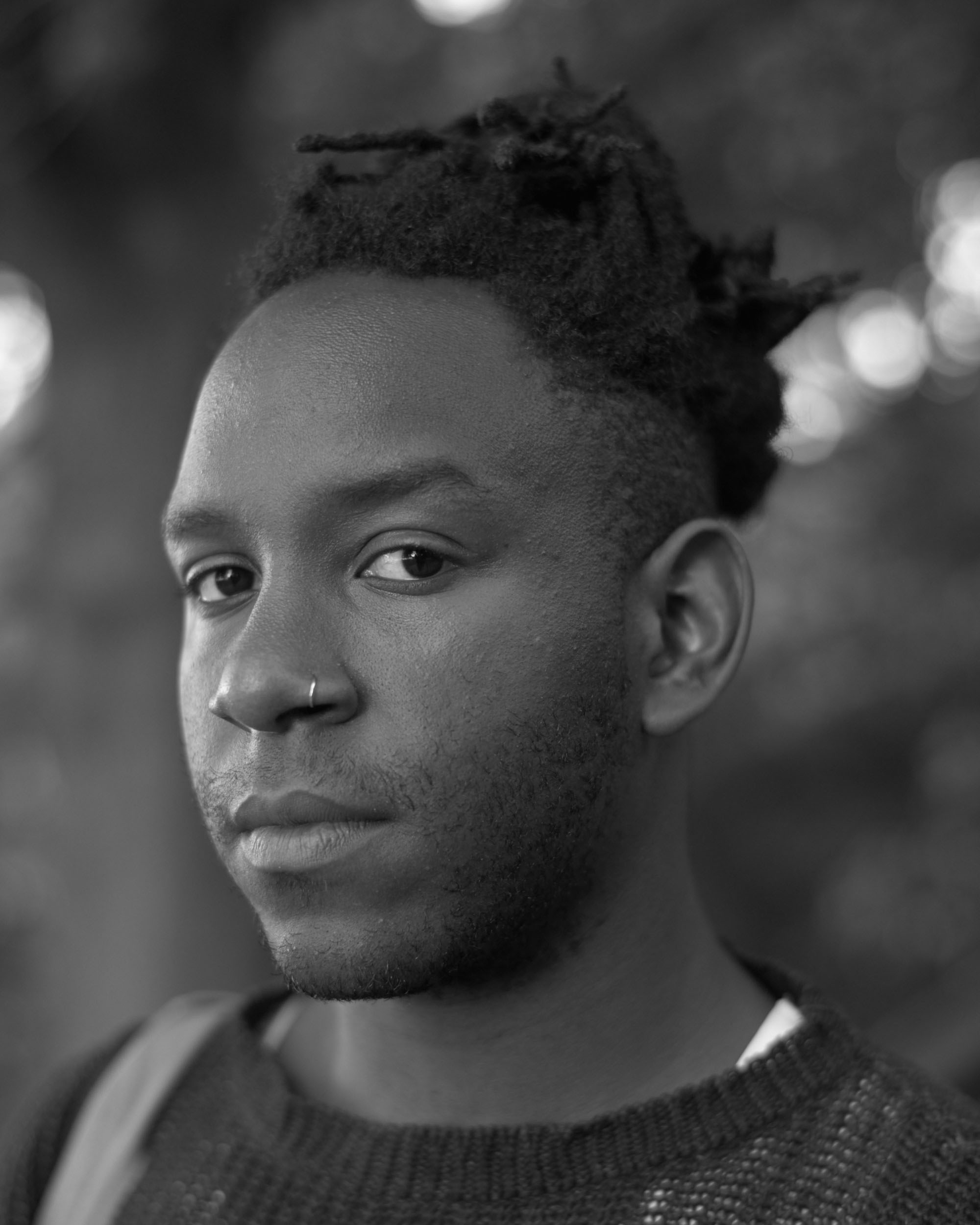 S*an D. Henry-Smith is an artist and writer working primarily in poetry, photography, performance, and publishing, engaging Black experimentalisms and collaborative practices across (and against) discipline. As mouthfeel, they collaborate with Imani Elizabeth Jackson, meditating on Black food, ecology, and ephemeral practices. Henry-Smith’s debut collection of poems and photographs, Wild Peach, was published by Futurepoem in 2020 and shortlisted for the PEN Open Book Award. “in awe of geometry & mornings”, exhibited at White Columns, brought to scale photographs from the book alongside a series of readings and conversations programmed with their collaborators. They are also the director of Lunar New Year, their first film.

The rotundity of tea,
when poured from majolica, corrects
the august incompetence
of the hand—mine—pouring tea.

If I were to have licked you
I might have died of lead poisoning.
Child labor went into your sheen.

You will never be fancy enough for queens,
although noblesse oblige admits you into palaces.
Queen-emulators want you to lift
their living rooms and quell their tantrums.
Has anyone hurled you, in a fit,
across a room, or cracked you against a kitchen counter?

Connoisseurs have opinions
about your involutions,
your refractory hunches.

Léon Arnoux, behold your firm’s
handwritten recipe for majolica glaze—
bleus transparents, chocolats porphires,
chocolats transparents non violètés—
specificities of handwriting
erect and tensile
sideways like a saint
or Madame de Sevigné
or Proust’s grandmother…
You were the firm’s director;
were you also its scribe?
Handwriting without a cause
attained a peak
I claim, famished,
as the best peak available
and therefore Parnassian—
and therefore Shostakovich?—
when in fact it’s just a glaze
recipe handwritten
in Arnoux’s book,
glaze notations sideways and femme,
though the inscribing hand
might not call itself femme.

Never worship the vase
but only the glaze, seen or unseen,
that surrounds its bumpy adumbrations.

Buds on Raphaelesque vase,
like Edna St. Vincent Millay, console.
Is glaze a portion
of my foetid song
to bifrons in the demonological grimoire
incarnated now on a Minton and Company cup?

Minton majolica you are mitten drinnen today—
in mitten drinnen, a Yiddish phrase
my mother inherited.
Fern and foxglove garden pot and stand,
your green intricacies are cake frosting
at a 1968 wedding I wasn’t invited to
but heard about from my mother
who disparaged the reception’s cold cuts
and brought home a bag of Jordan almonds.
I continue to ride between souvenir and disparagement.

And to the same purpose this refinement
as my disparagement of it?
Can disparagement be sliced
like a roll of vitello tonnato
served cold?  The knife cuts
evenly through embroiled curlicues
of veal slathered with mayonaise
and tuna, capers and parsley,
anchovies and vinegar
on a Minton dish with portrait of Queen Victoria
I hook myself into—that’s how
preposterously far
my assertions are.

Such questions congregate
around your dais
as, girdled
by vocables,
I crouch on the runic floor. 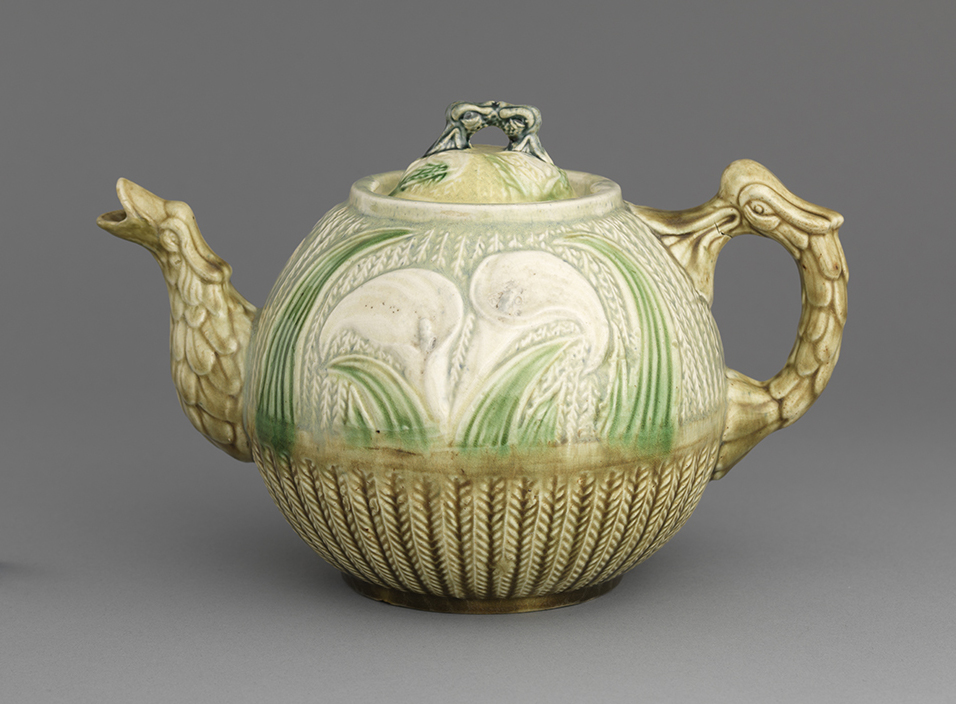 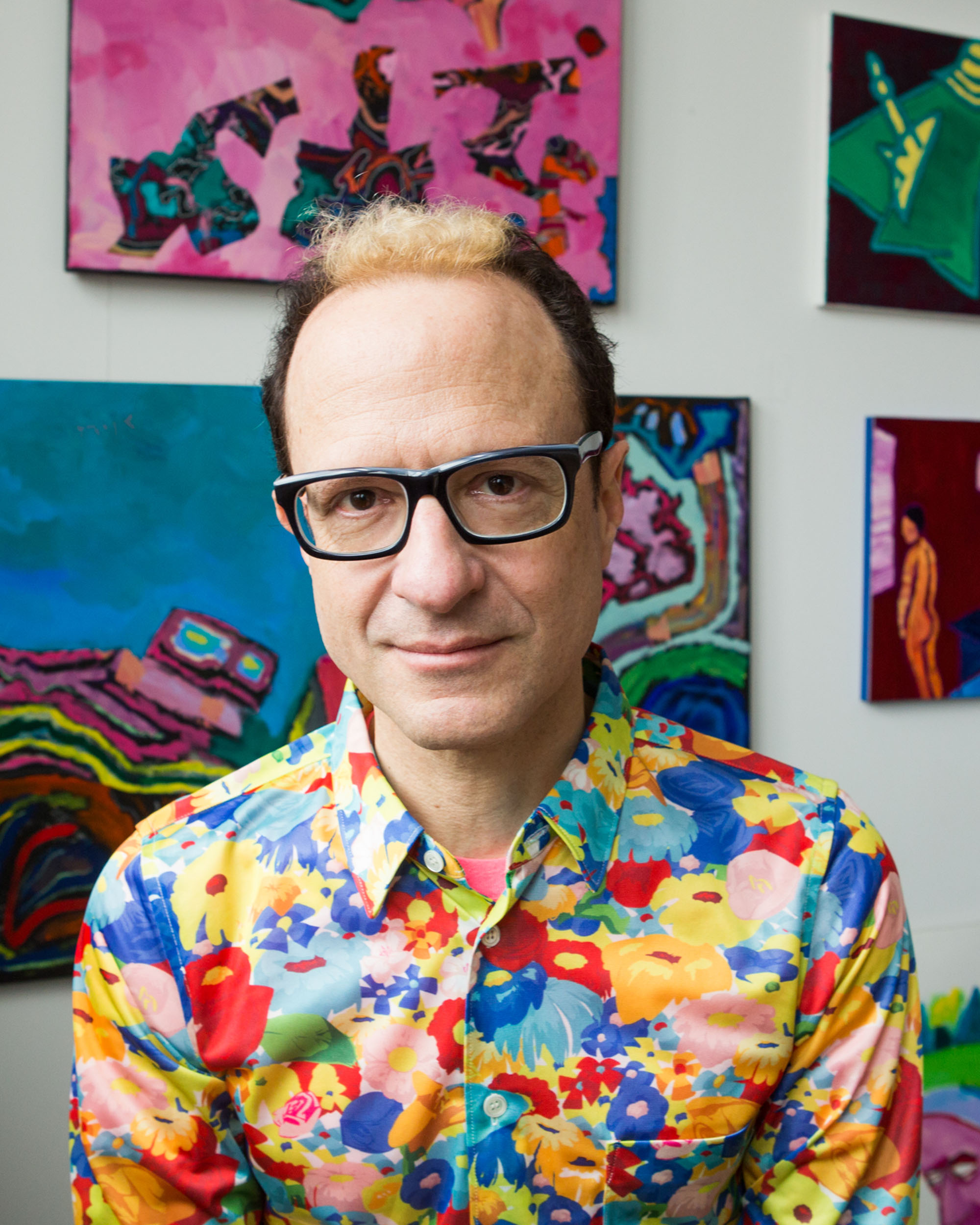 Wayne Koestenbaum—poet, critic, novelist, artist, performer—has published 21 books, including The Cheerful Scapegoat, Figure It Out, Camp Marmalade, My 1980s & Other Essays, The Anatomy of Harpo Marx, Humiliation, Hotel Theory, Circus, Andy Warhol, Jackie Under My Skin, and The Queen’s Throat (nominated for a National Book Critics Circle Award). His next book, Ultramarine, the third volume of his trance trilogy, will be published by Nightboat in February 2021. In 2020 he received an American Academy of Arts and Letters Award in Literature. Yale’s Beinecke Rare Book and Manuscript Library acquired his literary archive in 2019. He is Distinguished Professor of English, French, and Comparative Literature at the City University of New York Graduate Center.

bred breathless and wheezing,
snorting with terror-struck bells
for eyes. No wonder why so many

were shaped, painted, and baked
in a kiln, reproduced by Minton & Co.,
inventor of majolica, that soft-bodied

ceramic. Whatever the Queen loved,
the public loved too. She had other
pets, to be sure—an African Grey

parrot, a Shetland pony, a Persian goat,
all servile creatures she coddled
and punished. Victorian England

settled on imperial obsessions. Majolica
garden seat, shape no. 589: a monkey
holds a cushion up, inviting its owner

to sit. A three-dimensional trompe-l’oeil,
a nod to Darwin’s theories. To conquer
is to popularize the image—and testify

that an animal begs for its own conquest.
The trouble with tropics and so much frond
is that the sun bronzes skin and breeds

the basest urges, said the denizens of temperate
climes, whose lives were neutered by civility
and the Crown. Nevertheless, a craze emerged

The glassy colored glazes were leaden
and heavy metal, as paintresses

in the factories rouged the cherub’s

cheeks, swabbed the stork’s eye,
froze each palm leaf into its stencil—

how the paintress sniffed the lead, snuffed

out the flaws, and all the bright young ladies
grew dull and dim, tossed their lives

to avoid getting fired, and when the lead

paint glazes were fired in the kiln
for that signature shine, the majolica wares

to the lips of their buyers. The rich man
slurps a real Chesapeake oyster

from its decoy twin, carved in pink,

before she tasted the figs she colored,

before she mastered the mixture.
A thousand oysters she painted, in a lifetime,

but never once touched one with her lips. 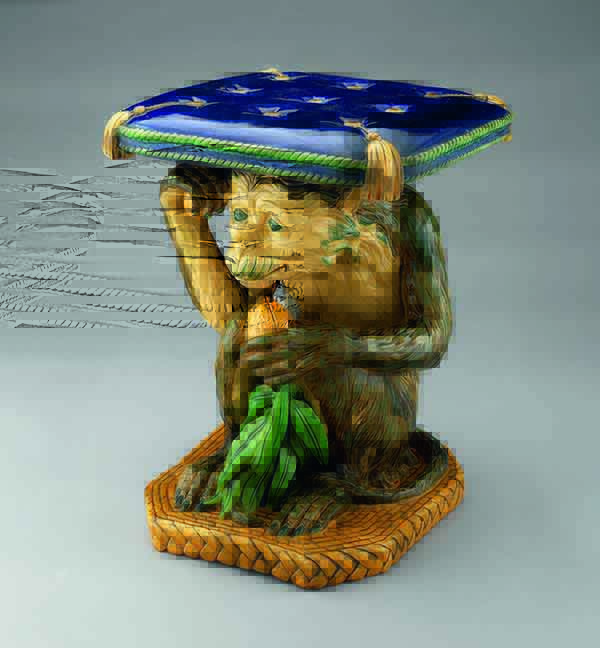 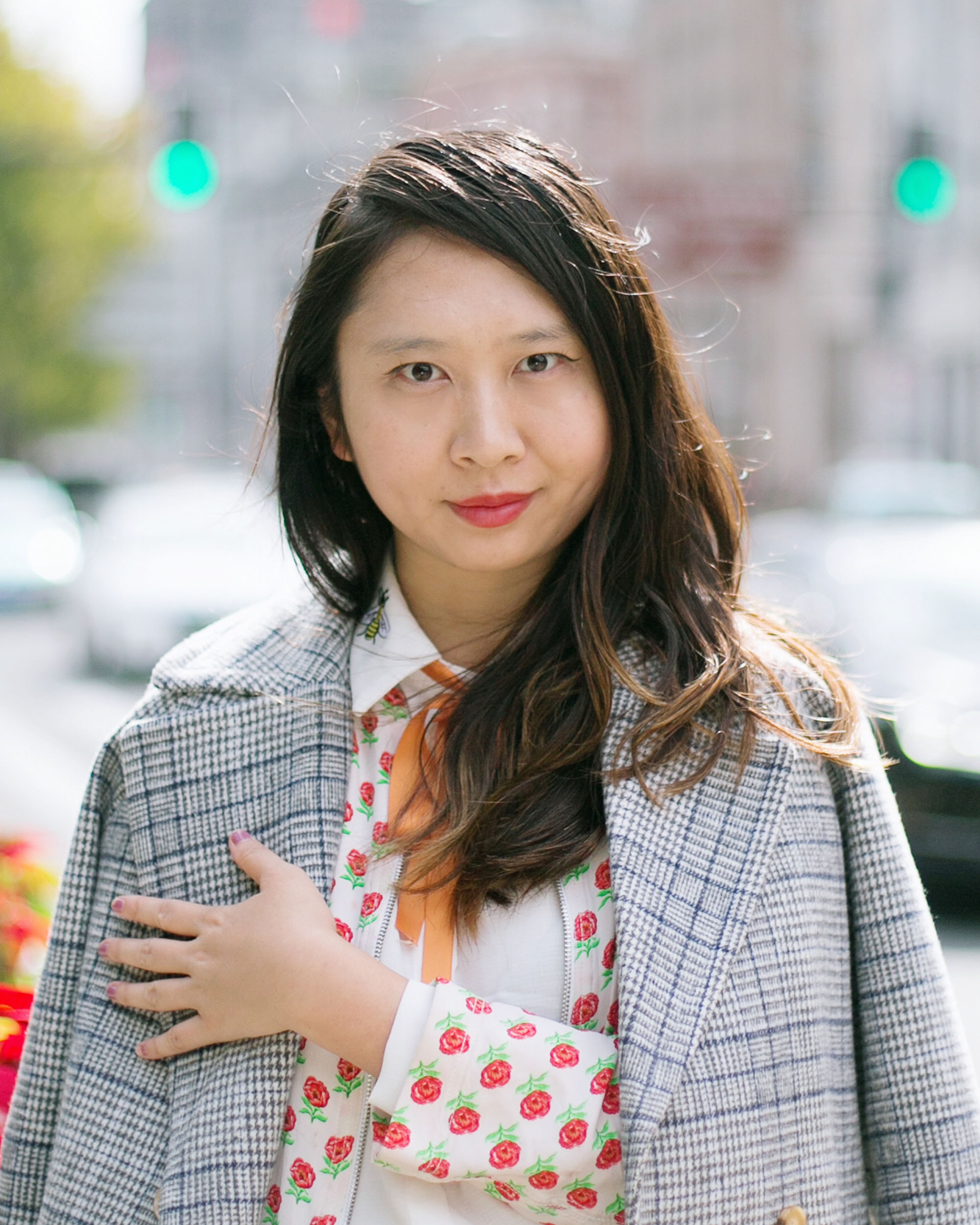 Sally Wen Mao is the author of two collections of poetry, Oculus (Graywolf Press, 2019), a finalist for the Los Angeles Times Book Prize, and Mad Honey Symposium (Alice James Books, 2014). The recipient of a Pushcart Prize and an NEA fellowship, she was recently a Cullman Fellow at the New York Public Library, a Jenny McKean Moore Writer-in-Washington at the George Washington University, and a Shearing Fellow at the Black Mountain Institute. Her poetry and prose have appeared in The Best American Poetry, The Paris Review, Poetry, Harpers Bazaar, The Kenyon Review, Guernica, and A Public Space, among others.