Fashions in Lace at the Habsburg Court

Fashions in Lace at the Habsburg Court

Habsburg Spain was the dominant European power from the sixteenth through the first half of the seventeenth century, with influence that extended to many areas of Europe and the Americas. For the elite men and women of the Habsburg court, expensive handmade needle and bobbin laces from Italy and the Southern Netherlands were indispensable. Spanish society during this period was rigidly hierarchical, and dress was the primary mode through which to signal social and economic class. Sumptuary laws decreed by successive kings aimed to restrict who could wear different types of lace. These sanctions were often flouted, however, as consumers of various social classes were eager to acquire and be depicted in this desirable textile.

Spain’s imperial power under the Habsburg monarchs is on full view in the portraits of its rulers and nobles arrayed in costly silk, velvet, and lace. The black garments typical of court fashions of this time provided the perfect foil for white lace accessories, including the lace-trimmed lechuguilla (a heavily starched ruff collar of oversized proportions), the valona llana (a spreading collar that extended over the shoulders and upper chest), and prominent cuffs. 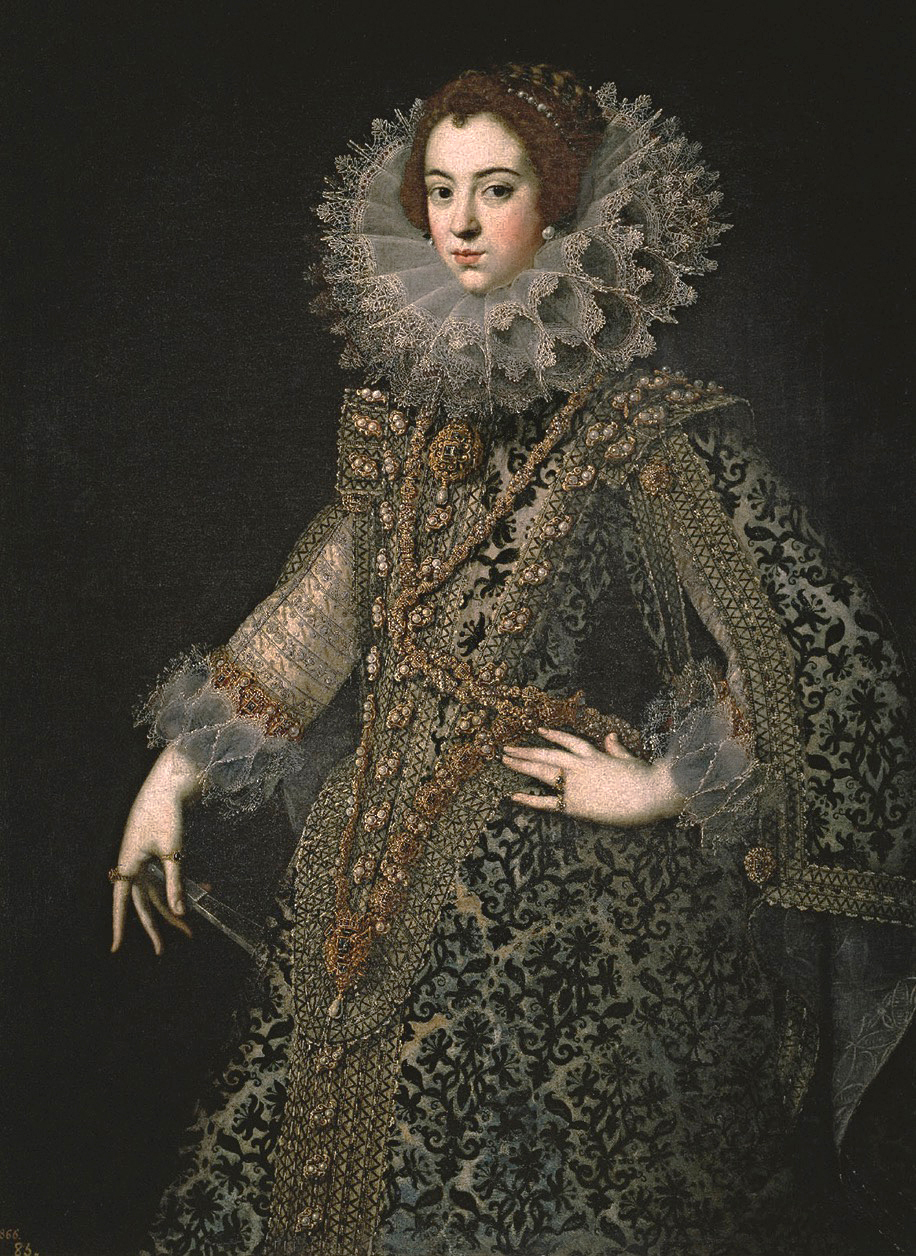 In the mid-seventeenth century, point de Venise needle lace quickly became the most sought-after style of lace throughout Europe. Large bundles of thread outlining swirling floral and foliate motifs created a sculptural lace used for the elaborate neckwear and other accessories worn by men and women during this period in Spain and France and on the Italian peninsula. Although lace was also produced in Spain at this time, output never rivaled that of the Flemish or Italian industries. Spanish elites, like their French and Italian counterparts, favored Italian point de Venise lace in particular for its three-dimensional appearance and inordinate expense.

By the time that point de Venise came into vogue, the Italian lace industry was fully established. It relied on a large workforce of female lacemakers in rural areas as well as women and girls living in convents and charitable institutions. In these organizations, which controlled a large portion of production on the Italian peninsula, supervisors served as intermediaries who negotiated commissions from private citizens or merchants. Although these lacemakers did not set the prices for the lace that they produced, a small share of the profits earned from their labor was occasionally set aside for their dowries.

Openwork and Lace in New Spain and the Andes

Before the Spanish invasion in the sixteenth century, the Indigenous peoples of what is now Latin America produced a wide variety of complex patterned textiles including openwork that played important roles in their social, cultural, and religious lives. While they inarguably imported many ills, Spanish colonizers also introduced European textiles, including needle and bobbin laces. Scholars have suggested that many Indigenous people appreciated these intricate and labor-intensive fabrics which corresponded with their own systems of value. The manufacture of traditional textiles continued after colonization, and the importation of European textiles—including lace—prompted the establishment of new local industries and introduced novel design elements into long-established weaving traditions. In nineteenth- and twentieth-century Mexico, lace adorned European-style women’s clothing and became a distinctive element of flamenco dress. In parts of the Andes, including in the Chancay valley in Perú, weavers still specialize in openwork techniques and local textile production continues to reflect centuries-old preferences for fibers, dyes, colors, and designs.

This interactive, developed by Bard Graduate Center students and on display in the gallery, focuses on three aspects of textiles produced and worn in the Andes and New Spain: Chancay gauzes that illustrate pre-colonial lace-like openwork weaving; laces depicted in casta paintings in New Spain and Perú; and Andean textiles known as cumbi that demonstrate the influence of European lace on Indigenous design. 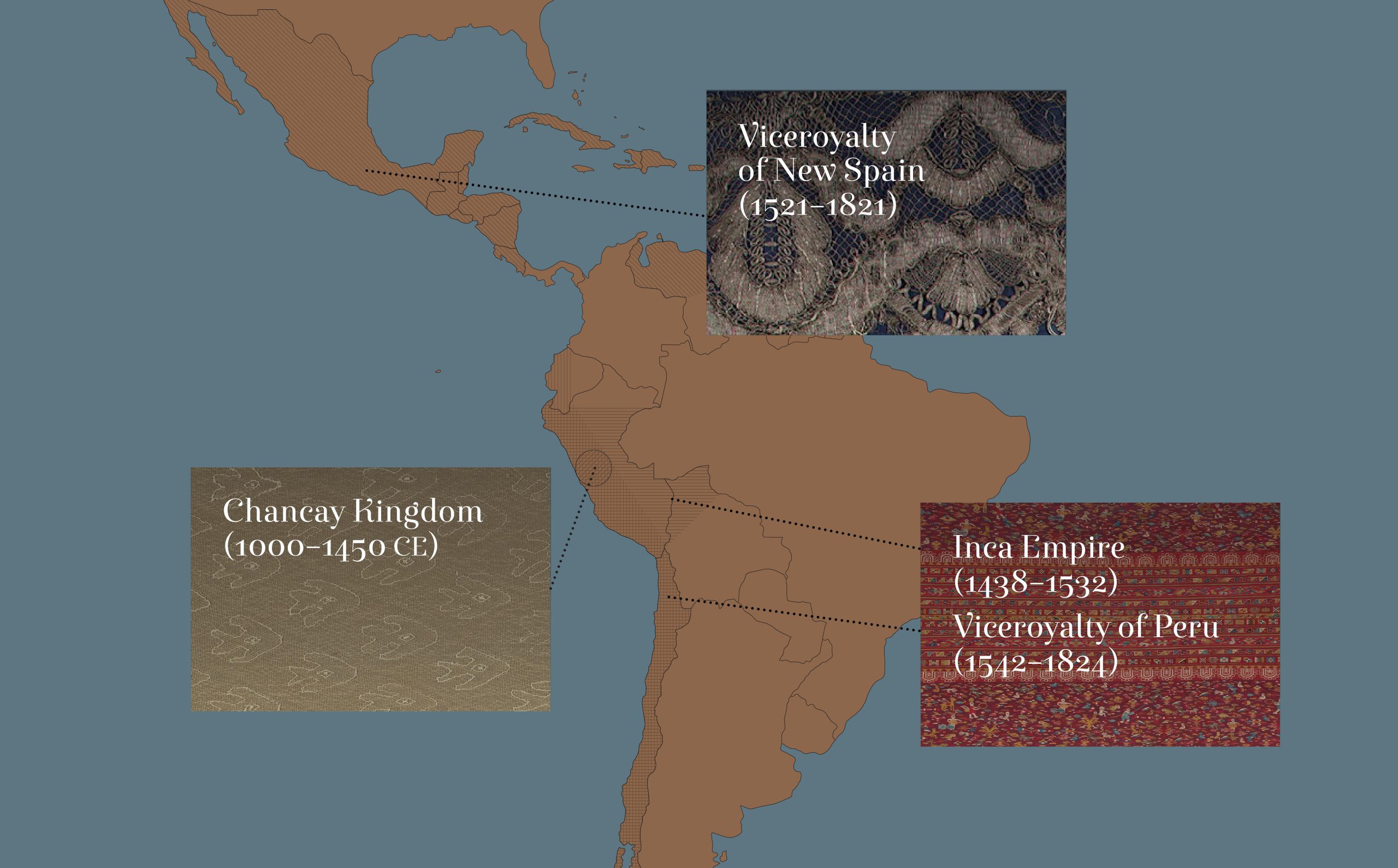